Ballistic-rated eye protection has become a mainstay of today’s armed forces. But, the use of tactical eyewear has also trickled down into many non-military applications.

What is ballistic & tactical eyewear? How does it differ from other eyewear?

The word “ballistic” means a free-moving object, such as a missile or cannon, fired from a fixed site. The term “tactical” refers to the activity supporting military operations, such as intelligence gathering or combat. Ballistic and tactical eyewear protect wearers from the dangers of these and similar situations.

Ballistic and tactical eyewear is designed to provide additional impact protection in harsh military environments, such as the Middle East, with its intense heat and frequent dust storms. Moreover, it does so at military-grade standards beyond those for industrial-rated safety eye protection. 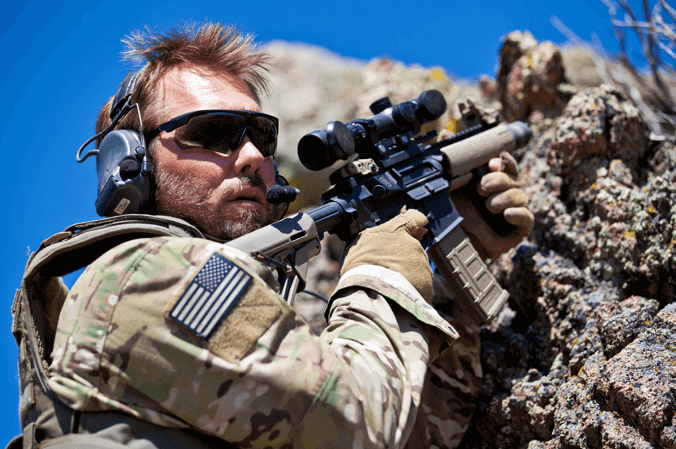 Ballistic Eyewear like the ESS Crossbow provides protection from extreme impact hazards found on the battlefield.

While ballistic-rated safety glasses and sunglasses make up a large segment of protective eyewear inside and outside the military, there can still be confusion over what actually classifies eyewear as ballistic-rated. Ballistic and tactical are words often used interchangeably in casual conversation. Still, not all ballistic eyewear is necessarily intended for tactical use, and not all tactical eyewear is ballistic-rated (though it should be).

The U.S. Military issued rigorous ballistic tests that protective eyewear worn by military personnel have to pass. These tests are conducted in a field environment that involves subjecting eyewear to projectiles at over four times the velocity of standard ANSI Z87.1 testing, the standard for industrial safety eyewear.

For example, ANSI (American National Standards Institute) tests projectiles at 150 fps (feet per second). While the military requires testing with projectiles traveling at 650 (+/- 10) fps for spectacles and 550 fps for goggles.

Smith Elite Eyewear provided this chart to show the differences between ANSI Z87.1 and the Military Ballistic Standards.

According to the Vision Conservation and Readiness Division through the Army Public Health Center, in addition to impact safety requirements, the Armed Forces also want eyewear to be…

What are MCEP and APEL?

“…helps ensure Soldiers are visually able to carry out their mission. Eye hazards exist in a variety of forms in both combat and training environments. They range from fragmenting munitions and other airborne debris, to invisible hazards such as ultraviolet (UV) radiation. If unprotected, the Soldier is susceptible to short- or long-term effects on their vision. This can compromise current and future mission effectiveness. MCEP helps preserve performance in both combat and training by reducing the risks associated with exposure to such hazards.”

Protective eyewear approved to be worn by U.S. military personnel must bear the APEL (Authorized Protective Eyewear List) logo or be listed on the official APEL website. This is the single-best way to know if your eyewear is approved for official military use.

The U.S. military insists that personnel only wear APEL-approved eye protection. This is not to just have another regulation. Instead, it is because there is a significant need for a protection standard beyond what typically works for the civilian population.

Remember that ballistic-rated civilian eyewear does not require and, in most instances, will not bear the APEL logo. However, most manufacturers will state in their product descriptions that their ballistic-rated eyewear meets MIL-PRF-31013 and MIL-DTL-43511D standards.

How great is the need for ballistic and tactical eyewear in the military?

The Official Homepage of the United States Army illustrated in Eye doctors teach combat trauma management the tremendous need for ballistic and tactical eyewear protection for individuals in the armed forces.

These statistics show the necessity of funding by Congress and stress the importance of research for treating eye injuries. The data also emphasize the importance of prevention through ballistic and tactical eyewear.

The need for ballistic and tactical eye protection extends well beyond military application and into many areas of civilian life. For more details on ballistic-rated eyewear both in the military and outside of it, check out these posts: