The Importance of Ballistic-Rated Eyewear

According to Army medical records, as reported in “Vision center of excellence promotes eye injury research, care,” 13-22% of all casualties between 2002 and 2010 involved eye injury or trauma, a number significantly increase from the 9% seen in Vietnam and the 1990-91 Gulf War. Additionally, “Study: Shock waves can damage eyes,” from the Marine Corps Times, gives Department of Defense data showing that eye injuries account for 13% of battlefield injuries and about 80% of eye injuries come from blasts.

Experts believe that many of these injuries could be prevented using ballistic-rated eyewear. In fact, as Marine Corps Times further indicates, eye injuries occurred 29% of the time before the military began requiring all personnel to use ballistic eyewear.

While wearing ballistic eyewear may not wholly eliminate eye injuries for military personnel, doing so will significantly reduce their occurrence, especially where fragments are concerned. Experts also recommend avoiding wearing contact lenses since dirt and sand can cause increased irritation and reducing the chance of cataracts by wearing ballistic-rated sunglasses blocking UV light.

To aid in its efforts for all military personnel to wear ballistic-rated eyewear, the MCEP (Military Combat Eye Protection) Program was created. This program focuses on protecting eyes from external threats and hazards such as fragmentation, electromagnetic radiation, wind, sand, and dust particles. It also provides vision correction & encourages feedback from the field. 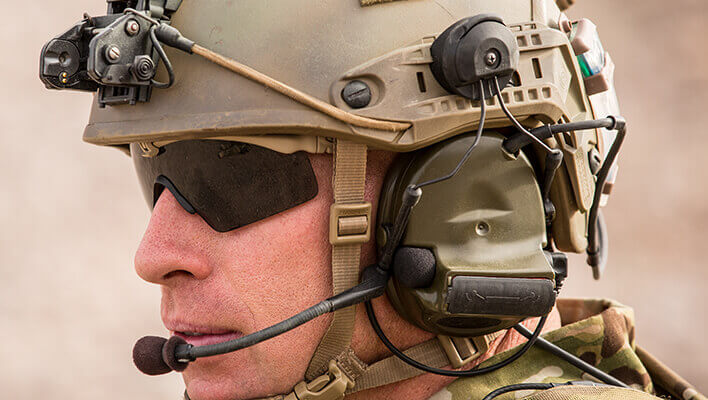 The Need to Go Beyond Ballistics-Rated Eyewear

Unfortunately, even with the more widespread use of ballistic-rated eyewear, serious eye wounds still present a growing problem in the military. While body armor protects vital organs and saves lives, eyes remain vulnerable against shockwaves from IEDs and high-energy blast waves, which often contribute to severe eye injury. As the article “War yields lessons in preventing, treating eye injuries” from the American Forces Press Services indicates, ballistic-rated eyewear currently only protects against fragments and shrapnel.

The University of Texas San Antonio and the U.S Army Institute for Surgical have discovered that a shockwave from an IED device is powerful enough to severely damage pig eyes. In addition, their data proves a shockwave can cause retinal detachment or optic nerve injury resulting in decreased vision or blindness.

So, while ballistic-rated eyewear is the best protection for those in active military duty, the need to go beyond ballistic-rated is clear. In fact, “as Study: Shock waves can damage eyes also says, “future research will look at computer models for protective eyewear and similar experiments to test materials developed by those models to protect service members’ vision from shock waves.”