What is an arc flash?

An arc flash is an electric current flowing through an arc outside its normal path where air becomes the conductor of high thermal energy. An arc flash hazard, according to the 2018 Edition NFPA 70E Handbook, is

A dangerous condition associated with the release of energy caused by an electrical arc.

During an arc flash, temperatures can reach 35,000 degrees Fahrenheit, four times hotter than the surface of the sun.

An arc blast can cause the same conditions as an arc flash but is more intense and can also include strong pressure waves that can damage machinery, throw a person, collapse a lung, or rupture ear drums. Arc flashes and arc blasts last maybe a second but can cause serious injury and sometimes death.

What causes an arc flash?

Arc flashes are caused by electrical short circuits and occur, according to the handbook, “when the gap between conductors or conductors and the ground is momentarily bridged.”

While there are a variety of possible trigger events, most of the time arc flashes are caused by human intervention. Examples of such interventions include: 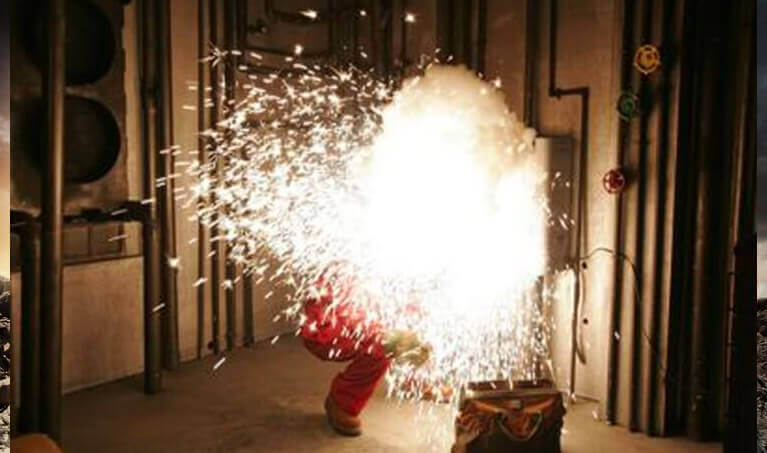 Why should you be concerned?

Estimates indicate that 10 to 15 serious arc flash incidents, those resulting in burn injuries requiring treatment in a burn center, occur each day in the United States. (2018 Edition NFPA 70E Handbook)

The tremendous amount of heat generated by an arc flash makes being anywhere near arc flash hazards dangerous. In fact, liability and government regulations apply not just to those working with energized equipment but also to every worker in the vicinity.

Unfortunately, according to OSHA,

There is much confusion about regulatory compliance in regard to electrical hazards.

What is not confusing is that the intense heat caused by an arc flash can cause life-threatening burns, and the intense light can cause blindness. In addition, exposure to arcing faults can also cause:

How do you protect yourself?

The best way to protect against an arc flash is to choose an appropriate arc flash protection system. A good system includes de-energizing equipment and wearing personal protective equipment.

The key to creating a work environment safe from arc flash hazards:

Make injury prevention your overall objective, and you’ll find your organization will be more than just compliant; it will be a safer place to work.” (Lewellyn Technology)